Way too long ago!

First, I think I should apologies for not keeping my blog up to date. There aren't that many followers here, but that is probably because I don't update enough!

So, what happened since my last blog? Not that much, I'm afraid. I started this blog to encourage myself to paint more, and hopefully get some reaction from fellow wargamers.
I already painted more miniatures than I did last year, so there something possitive to tell! Not that it was that difficult, I only painted 93 28mm figs last year. My personal record is 209 28mm figs and 20 15mm figs in 2005. Counter now stands at 99, and I hope to add more before the end of the year.
We also played several games using the new and superb Clash of Empires rules. We (me and my gaming friends) like these rules a lot. No more super characters (as in WAB), it are the common (miniature) soldiers who have to do the work! I'm eagerly awaiting my copy of the first supplement, The rise and fall of Persia. Excactly the historical period of my main interest.

Some pictures of my latest painting: 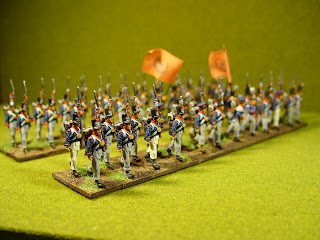 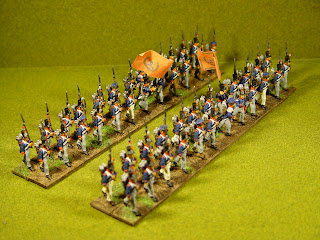 These are the first two 1-battalion regiments of my Napoleonic Dutch-Belgian army. 24 figs a unit, and based for Black Powder. Perry Miniatares, naturaly! Plan is to paint a few units a year, and play the prelude to Waterloo, Quatre-Bras for its 200th anniversary (in 2015). Jeroen is busy painting the French. But we still have a lot to paint...
I also painted a Scipio model I got several years ago as a freebie, and recently found between my Macedonians. 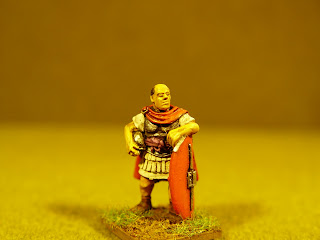 Would you believe this is the first Roman model I painted?
For some reason I always liked Greeks, Macedonians or Persians more.

My latest are a few Greek skirmishers (Foundry) which have been kept in the drawer, because I didn't need them directly. I now have 40 of these, next to 24 archers and 12 slingers. Enough skirmishers for the moment I think. 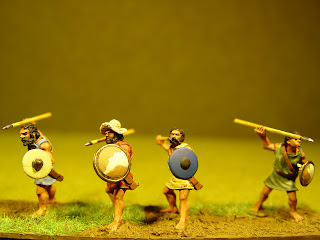 Though we mostly play Clash of Empires now, I keep basing them as in DBx or Armati. You never know what it's good foor, and there are no problems for using them in CoE.

As a latest addition, I've been to Crisis '11 yesterday. Helping a bit with our club stand (HQ gams club). I've been visiting Crisis since it's first issue, I can't even remember how many years ago that was! But I still like this show. Less than half an hour riding from my home, spending the whole day there, not to mention my hard earned cash! I did not spend that much of money this year. Hardly any new lead, but the mountain at home is still huge!

Enough of this, and back to painting.
Gepost door WimVdB op 12:36