I have not been painting a lot for a while, must have had a painting block (not to be confused with block painting!)
I lost my spirit because of working on too many projects and not finishing one.
What I did get ready for battle are my 15mm pike units. I finished 72 freshly painted Leukaspides (white shields), good for two units, and repainted two more 36 figure units. Each of the six units also got their movement tray for playing To the Strongest (TtS for short), the ancients rules set by Simon Miller AKA BigRedBat (see BigRedBatCave) . I bought these rules when they were just out and after playing a few solo games, tried to get my friends playing. I must admit that since then we only played one (1!) game.
Last year at Crisis in Antwerp I also played a game set up by Simon and friends, using 15mm figures, and that got me searching for my own old 15mm figures. Most of them are well over 30 years old, but who'll notice that, when there are several hunderds of them on the battlefield?
Anyway, lots of rambling by me, but here are a few pictures. 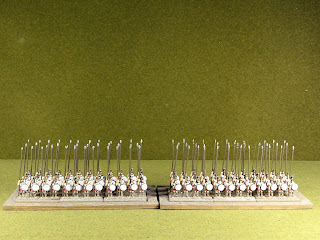 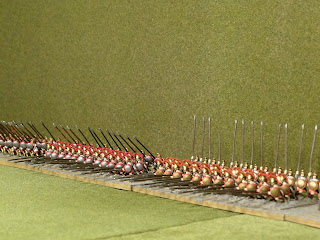 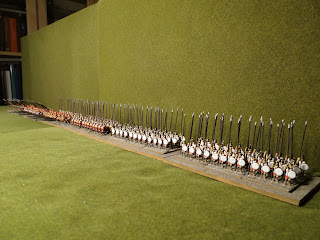 And all six units.

That's it for heavy infantry for my Seleucids in 15mm.
If you've never heard of Argyraspides, Leukaspides or Chalkaspides, don't despair! It are just the names of phalanx units, named after the colour of their shields. Spides is the type of shield. So Argyraspides are the famous Silver Shields (who also existed in Alexander the Great's army and were his elite phalanx troops). Leukaspides are the White Shields and Chalkaspides are the Bronze Shields.
I plan to build movement trays for all my other 15mm units now. This might take some time as I'm now trying to clear my painting desk of half painted units and loose figures...
Gepost door WimVdB op 04:55