Well, slightly overdue, but here is yet another update of me painting!
The title of this blogpost is obviously linked to the well known movie, Monty Python and the Holy Grail. I must soon see that one again on DVD.

As it is that time of the year, why not have a bit of a scary subject? Somewere, deep beneath the dreaded Lead Mountain, I knew I still had some very old skeleton miniatures. I'm trying to kickstart my painting habit again, and simple, quick to paint miniatures are the best way to get going. To me anyway. So here are some +40 years old skeletons from Minifigs' Valley of the Four Winds range. 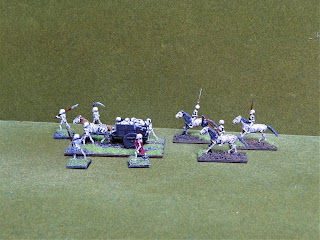 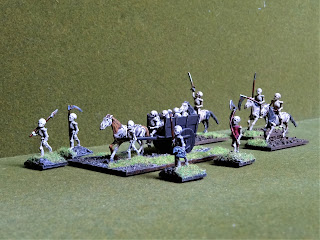 I had to put the foot skeletons on higher bases, as they are "true" 25mm figures. By doing this, I could put them next to the few skeletons I had painted some years ago. 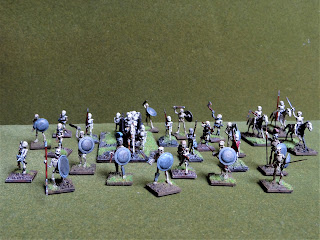 Everyone knows that undead don't rize out of the earth by themselves, so I needed some kind of magic-user too. Yet another old model was used for this. This time form Minifigs Aureola Rococco range, which is also nearly 40 years old! His guardian on horseback is, I think an old Citadel Chaos warrior. I dod not have the apropriate horse, but had a spare late medieval Essex horse. Fits nicely methinks! 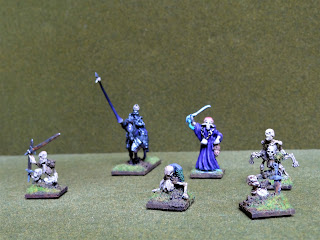 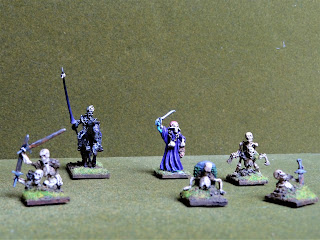 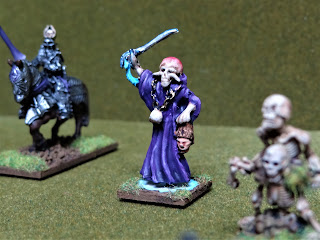 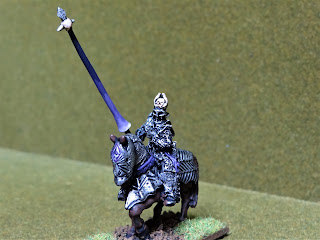 The skeletons raising from the earth are form Warmonger / Wargames Foundry.
That's my undead troops, ready for a small skirmish. One Page Rules skirmish will be tested later today with some of my friends. See you soon!

PS The plastic Napoleonic French are on the hold for now. I have some problems with my printer, and can't print the flags for now. Pictures will follow as soon as they are ready.
Gepost door WimVdB op 06:27