Ancients is still my prime wargames period. To be more precise, ancient Greece up to the fall of the Hellenistic kingdoms. This still is a fairly wide period, and if you also count in their possible enemies... I don't think I will ever have enough of them.
If I may give you a link to another blog with an excellent battle report and pictures of the battl of Hydaspes, head over to caliban-somewhen
20 Elephants on the Indians' side, truly spectacular!

Last year (2014) I visited Salute and bought some 1st Corps Scythian heavy cavalry. The figures were just new, and since I did not have any heavy Scythians yet, "had to buy them". Here we are, a year later, and finaly half of them actualy got painted!
The horses are a bit on the small side, compared to the Foundry Scythians, but other than that, great sculpts. One thing I didn't know when I bought them is that they come in a few pieces. You have a horse, a rider, a hand with attached weapon, a shield and a quiver with bow. It all had to be glued together, so quite a bit of superglue ended on my hands. Luckely I didn't glue my fingers on one of the miniatures, but I am out of superglue for the moment. 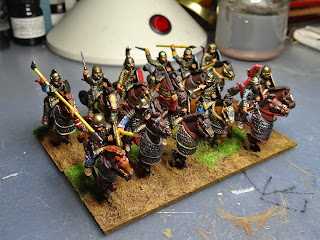 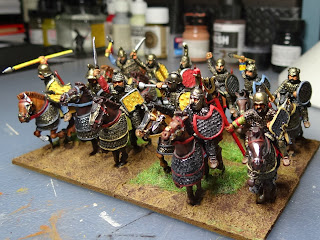 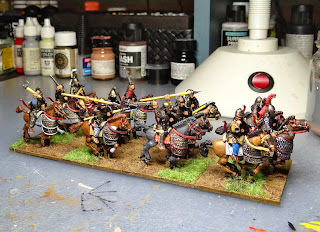 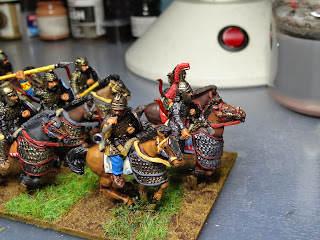 As you can see, nice, well detailed figures.

On top of that, I also got two other figures painted. These two Vikings were drifting along the painting table half painted since, well lets call it a long time. Over 18 months at least.
And now they are completed! Strangely enough, I don't have any other Vikings. I don't even know why I bought them. (Is that reason enough to start a new army?) It is a Viking king from Crusader Miniatures and a character from Gripping Beast. I can't find the king on the website anymore, so it could be I'm wrong on that one. 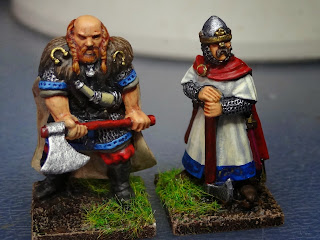 All pictures are still made on my painting table. I will try to have a proper "photo studio" ready net time.

Gaming-wise it has been a bit less recently. Only a few board games. The closest to wargaming we played was Command and Colors ancients. After several years of owning the basic box and three supplements, we are coming close to playing the last scenario of the basic box...
Gepost door WimVdB op 16:05