As told before, for some unknown reason I could not add more pictures to the former blog message. So here is the general, promised last time. 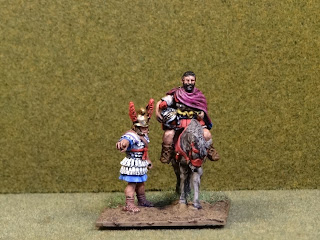 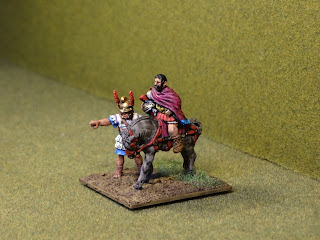 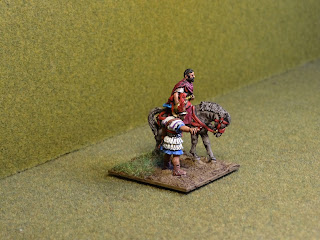 The general is wearing most expensive clothing, so I used colours which were expensive to produce in those days: purple and yellow. Armour and helmet are covered in silver and gold.
The high officer, pointing to some interesting feat happening in the far distance, got his armour in brass to distinguish him from other foot troops.
The miniatures are from 1st Corps (general on horse) and Wargames Foundry (foot officer).

We played a game of Basic Impetus last friday, the first miniatures game since a long time. Early Seleucids (me) against Pyrrhus (Peter). As usual, I lost. After being on the win for the largest part of the battle. A few bad dice rolls, and it was all over. I still like the rules though, Iand would like to try the full Impetus rules somewere in the near future.

Well, my backlog is now completely posted on the blog. I'm currently working on some Greek mythology figures, and who knows what will follow next.
It might be more successors (I have a lot unpainted), more mythology or fantasy, or finaly painting those last three battalions for my Napoleonic army.
Gepost door WimVdB op 11:16