More then a year ago, I discovered the extensive range of ancient figures from Aventine Figures, with thanks to Mr Simon Miller from the Bigredbatcave and his rules, To the Strongest . See here for the Aventine website.
Well, I could use some more elephants I thought, so I ordered a fully armoured elephant from their range. It is a multipart beast, and I stuck it together that same day. And then it stood there, on a shelf, for many months. And then after all this time, I ordered another one, also armoured, but a different model (they do have a very large range of elephants!). That one was also build rather quickly, but there was no place next to the other on the shelf of unpainted - still to do stuff.
Ah, what the heck, lets paint them both I thought. The result is rather pleasing, I must say.
You can judge them for yourself right here:
All pics are clickable for a higher resolution, if desired. 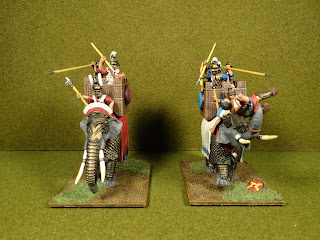 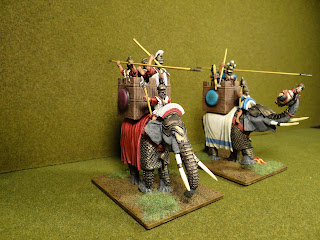 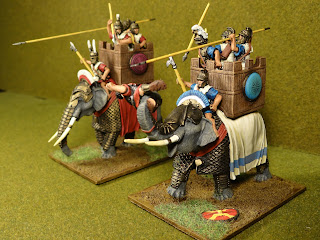 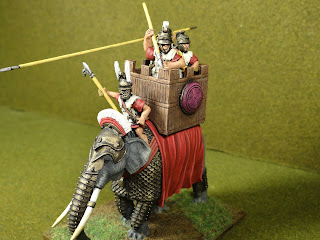 The Roman, dangling from the grips of one of the elephants was a nice extra, which I "needed" to buy when I ordered one of them. The shield on the ground is actually a left over from a Gallic plastic set, I believe from Wargames Factory. If you watched the pictures on my former blog post, you may have noticed that the elephants were already on the table there, in one of our double Armati battles.