Hello again!
Here are a few pictures of my latest painting efforts.
I painted a unit of 15 Agrianians. They were ready by the end of august, but I still had to make a picture of them. 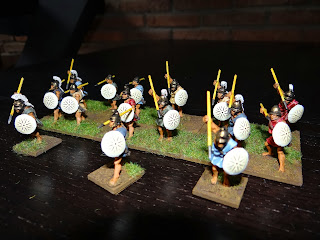 I wanted them to look very different from my other skirmishers, so they all have the same white shield with the Macedonian star on it. As they were a elite unit under Alexander the Great, I also used miniatures that had helmets on.  Nobody will take them for the usual javelin-armed skirmishers I think!

Next are some Greek Hoplites. I already have a lot of them, but reorganised them into 36 fig units. So I needed some extra. Most of them  are from Crusader Miniatures, but there are also a few from the old Vendel range. All have Vendel shields, as they will enlarge my Vendel units. I had to use some Crusader Miniatures because Vendel is not available anymore in Europe. The range was sold off to an American seller. 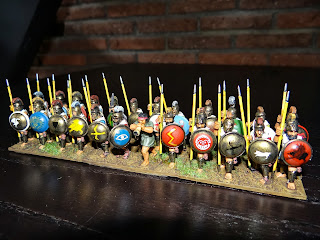 And some more Crusader Miniatures hoplites!
They will enlarge my Foundry hoplite units, and have been giving Foundry shields. 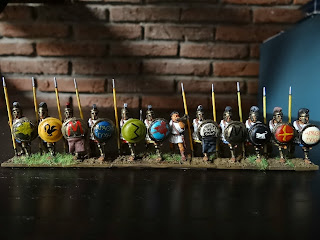 I still have to varnish the figures, which shows at the borders of the decals on the shields. This will be unvisible when varnished.
I now have 5 hoplite units of 36 miniatures and one 48 miniature unit of levy hoplites.
Oh, and a small unit of 20 Theban Sacred Band. (not counting the Spartan hoplites here!)
That wil be enough for a scenario I have planned: Chaeronnea!
For this I have to paint 1 more unit of Macedonian Phalanx and a few (10) light troops. I am currently working on the lights, and the phalanx will follow shortly.

Just one more picture to share.
A Macedonian foot commander. 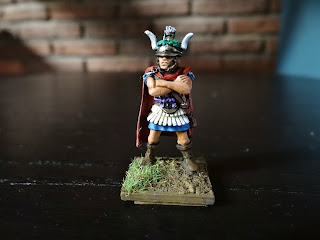 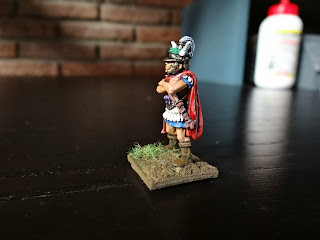 It is a from the Foundry "World of the Greeks" range.
Lovely model, isn't it?