It's been a while since my last post here. There are a few reasons for this. Non of it has something to do with our beloved hobby of miniatures wargaming.
First there was a new course I had to follow for work, plus tests.
Then only a few weeks ago, I became grandfather, which is something special, I can assure you!
In between things, my wife and me also went on a vacation. So there was not so much time for the hobby.
I have been working on my Napoleonic Nassuaers, but the "painting mojo" left me when we came back from vacation.. Seeing the same figures for too long on my painting desk was the killer for me (were are the helpfull gnomes when you need them?)

Then I found some very positive advice on a set of rules called One Hour Wargames, written by Neil Thomas. I bought them on Amazon, and read them through in one evening.
It is a book with a few very basic rulessets and 30 scenario's, which can be used with each of the different rules. An army consists of a maximum of 6 units and minimum of 3, depending on the scenario played. You cannot choose which type of units you have. Just throw a dice, and check on a list what you get.
I made a few small changes, and played the first scenario solo. It was fun, and indeed, it is possible to finish a game in around an hour.

I played the game using my very old 15mm minifigs Seleucids and a Galatian army of mixed makes. These armies are both  based for the DBx family rules (but mostly used for Armati, once they were painted).
I needed a few more, and knew I had some unpainted staked somewhere at the attic. And there I bumped into a long forgotten treasure. My very first fantasy army, made of the now mythical Minifigs Aureola Rococo figures. The Knights of the Silver Rose to be more precise.
These are at least 35 years old, and unfortunately, many were damaged and the painting was terrible, being painted by a young teenager (me...) with the only paints available then, humbrol enamels. It also seemd I used each and every different colour I had. So in a paint remover filled jar they went! 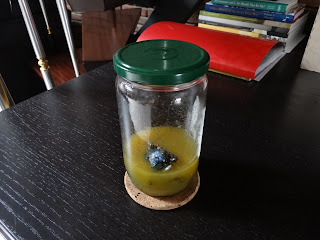 There were even some miniatures still packed, just as they were when I bought them. 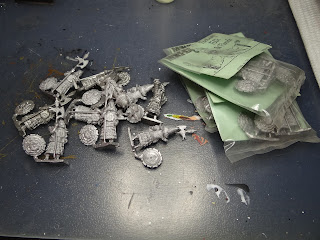 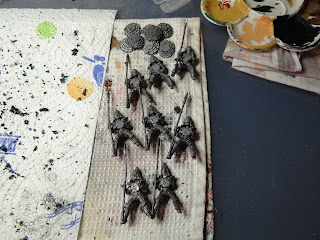 While looking for a descent painting scheme, I discovered to my astonishment that they had the wrong horses! Mine were seated on the cool looking Elf horses (code ARH1), but they needed the much heavier and barded knight horses, code ARH4. Luckely for me, the correct horses are again for sale now, thanks to Dave of Caliverbooks fame (he bought the complete Minifigs range).
So, while waiting for the horses to arrive, I 'm painting the foot knights. I used a simple painting scheme. I don't want to spend to much time on them, but they will be nice when ready.

Pictures will come when the complete "army" is ready. That is around 50 foot and 20 mounted figures. Looks like another Dragon RAmpant army is in the making!
A few specials may follow after these, as I also have both the small and large dragon from this range and a few others.. So yes, I 'm painting again! but it is not Napoleonics for the moment...
Gepost door WimVdB op 11:45