May I first whish the few readers here a HAPPY AND HEALTY NEW YEAR!

While I used to read many books in the pre internet era, that number has crumbled slowly since I spend more time on the internet. It never stopped though, but reading books takes time. And time is limited!

In 2021 I said to myself I really need to read more books. The 'to read' pile was starting to look like my lead mountain and take enormous proportion. I simply can't walk by a bookstore without at least taking a look, and many times enter the store to buy that book I can't do without. So, while still not the high book count from the old days, i did read some. And a few nice ones too, but only one can be the best! This is offcourse a personal choise, and if you think another book should be 'book of the year', please let me know. 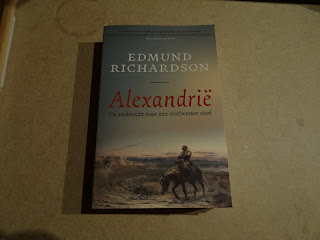 This book is originaly written in English, but if possible I try to read a book in my own language, Flemish (or Dutch which is the same). I bought this book because it had a painting on the cover that I recognised: Remnants of an Army, painted by Elisabeth Butler and showing the only survivor of the British army who reach safety after the debacle of the 1st Afghan War - William Brydon. I was a little confused by the title, Alexandrië (Alexandria in English), thinking it was about the best known Alexandria, the city in Egypt. But as this is the best known city founded by Alexander the Great, it was far from the only one. This city was also known as Alexandria under the Mountains.

This book tells the story of James Lewis, a British soldier in the East India Company. The story starts when he decides to leave the army in the summer of 1827. First thing he does is change his name. From now on he is Charles Masson. He leaves India by foot and enters the Afghan mountains. I'm not going to tell the comlete story, you will have to buy the book and find out for yourself. During the coming years, Charles got beaten up, become friends with kings and princes, almost freezes to death, searches and discovers and ancient city, land in prison, and become a spy. It is also about early archeology. And I have not even told about all the other strange characters which roam the pages of this fantastic book, friends and villains. The book also tells about the beginning of the First Afghan War (and how wrong the British East india Company was). It's a book for boys who've grown up. And while it is a biography, and tells about real events, it is far more exiting then most of the recent written fantasy books I know of.