As you know by now, most of my armies are 28mm for the anient or medieval period. But I am also slowly building a Napoleonic allied army for 1815.
I painted two units earlier this year, and now my first brigade is ready.
The first unit is the 5th Dutch militia, a standard 24 fig unit. (our standard Black Powder unit) 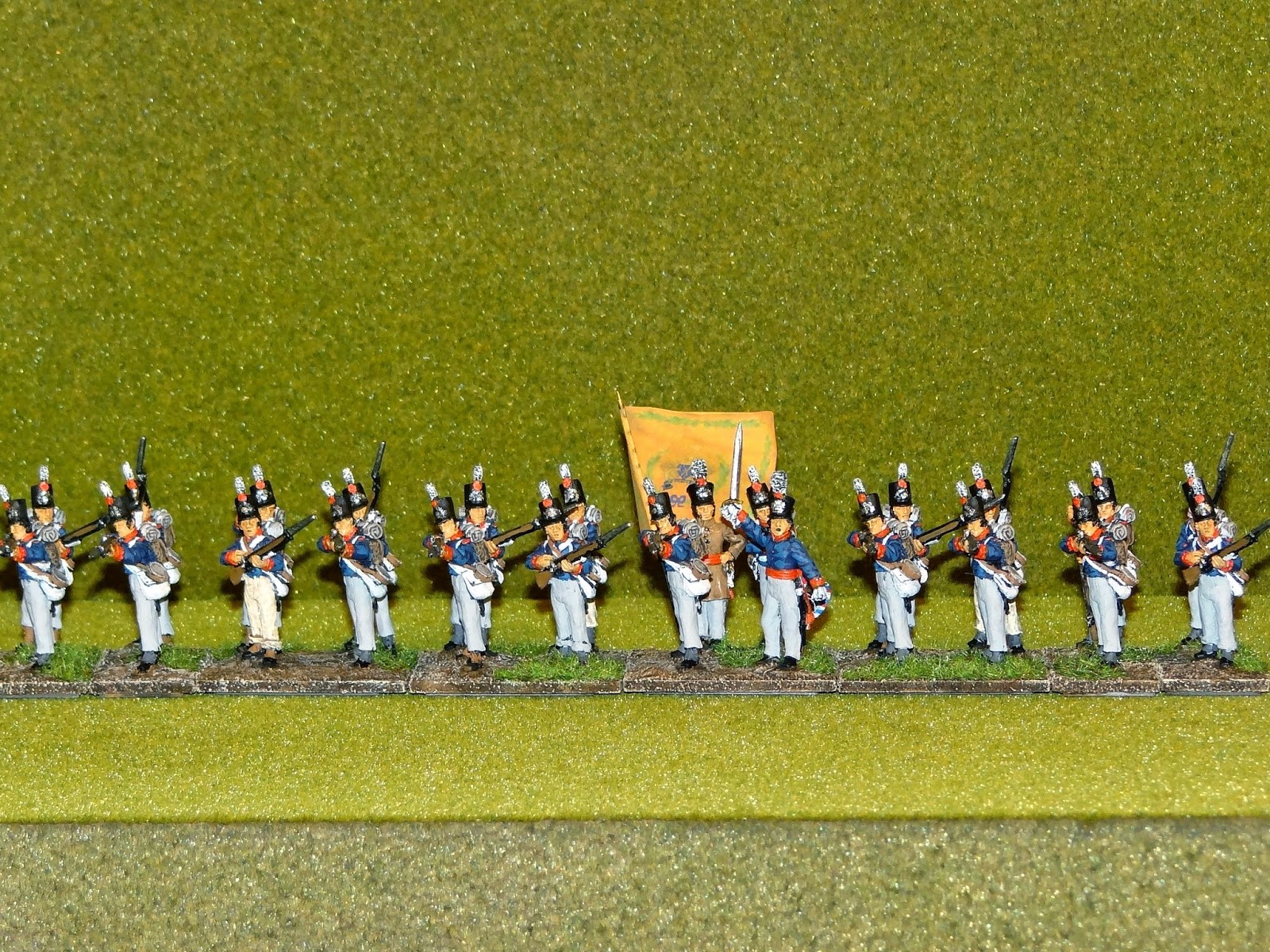 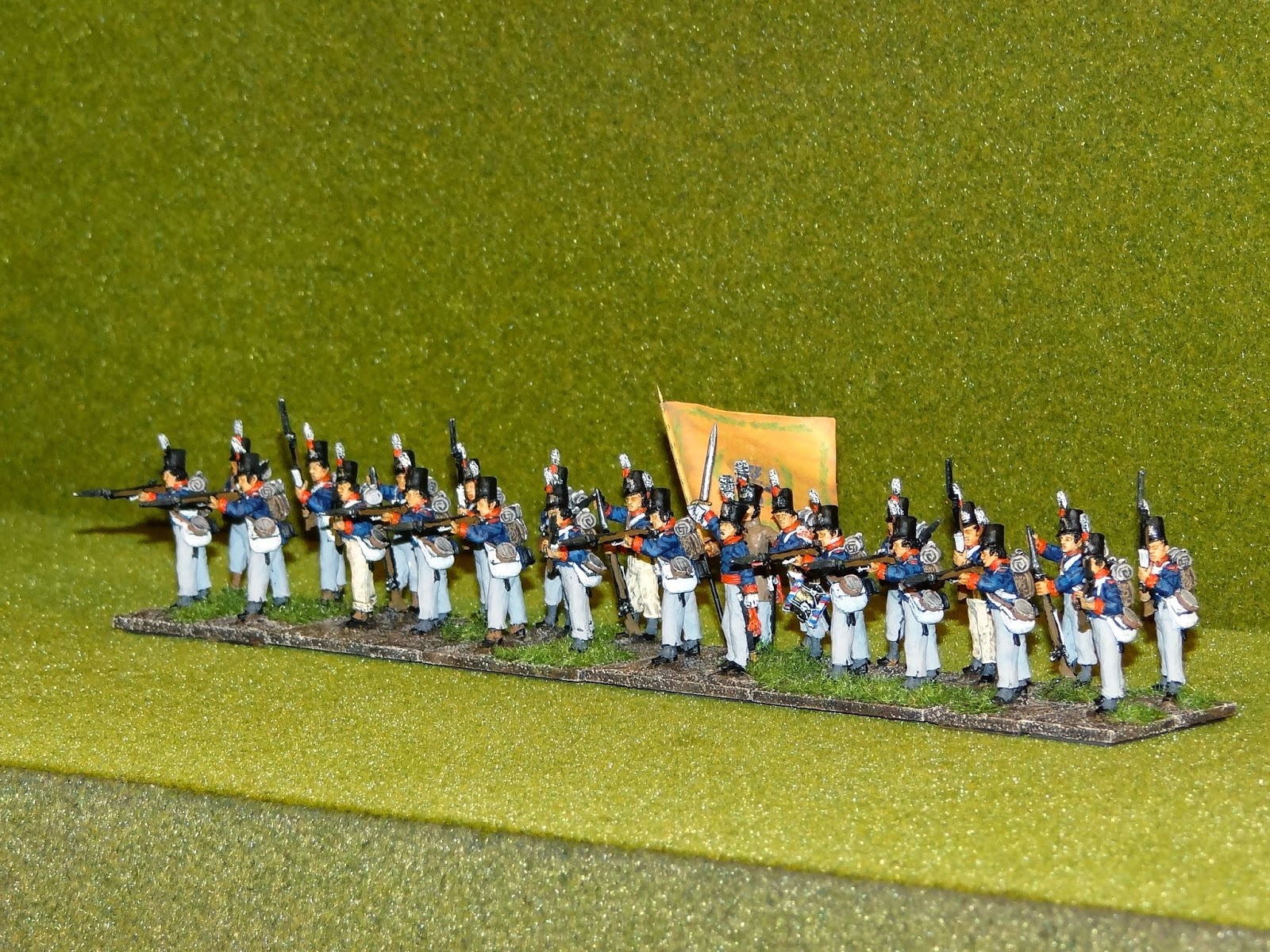 The second is the famous Belgian 7th line regiment, a large 36 fig unit. 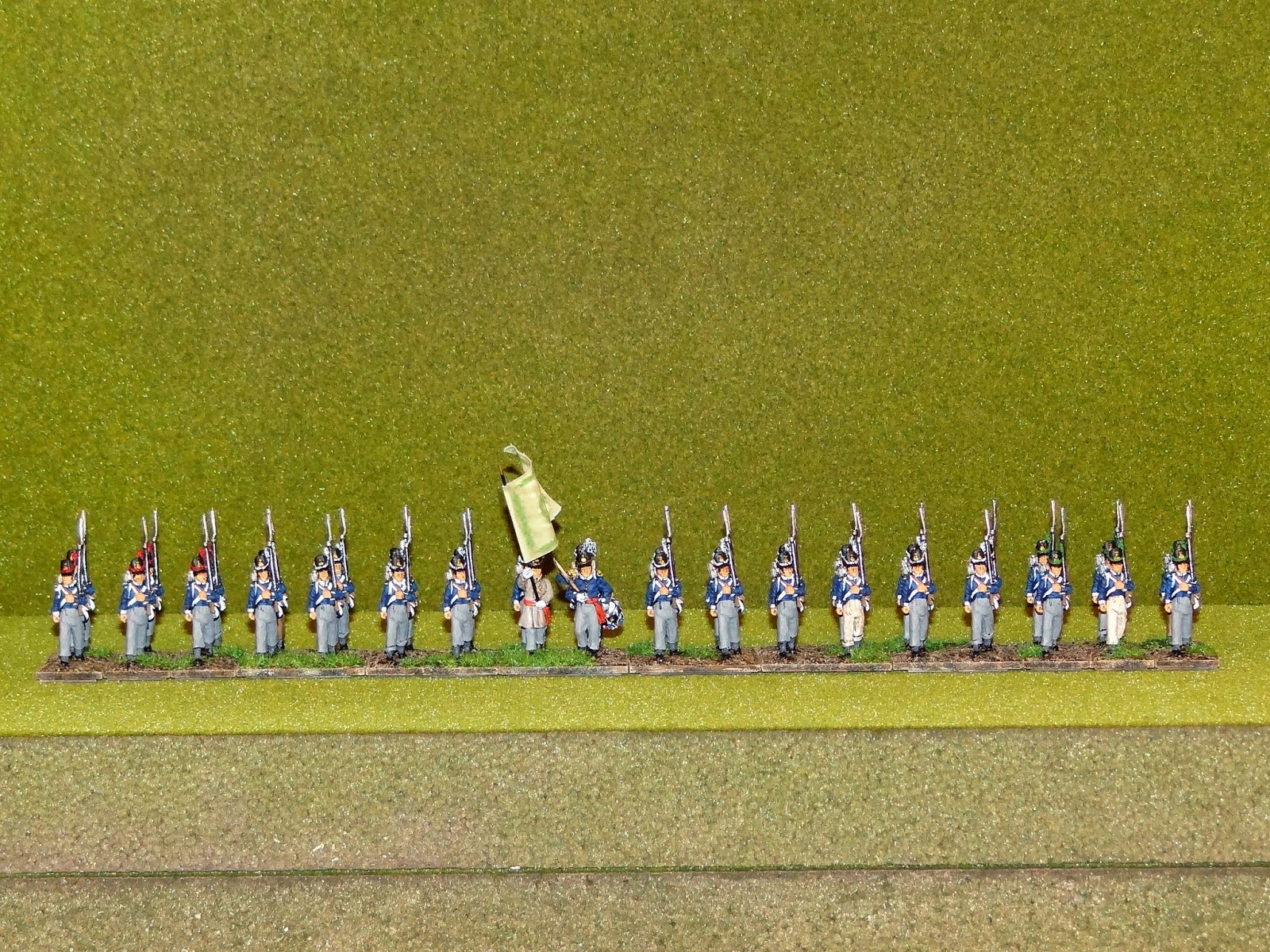 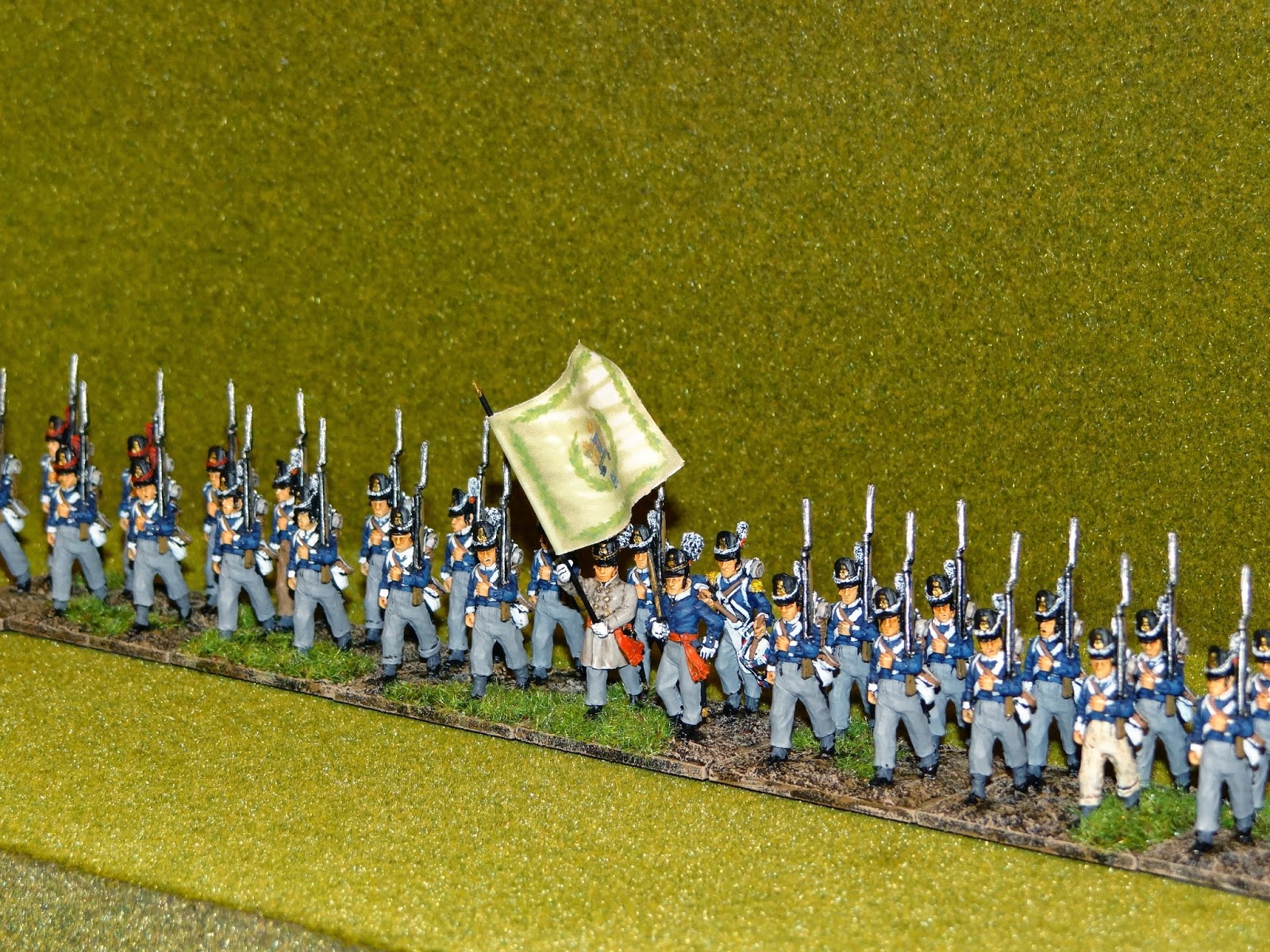 And some "wound counters", to keep track on the status of the units. 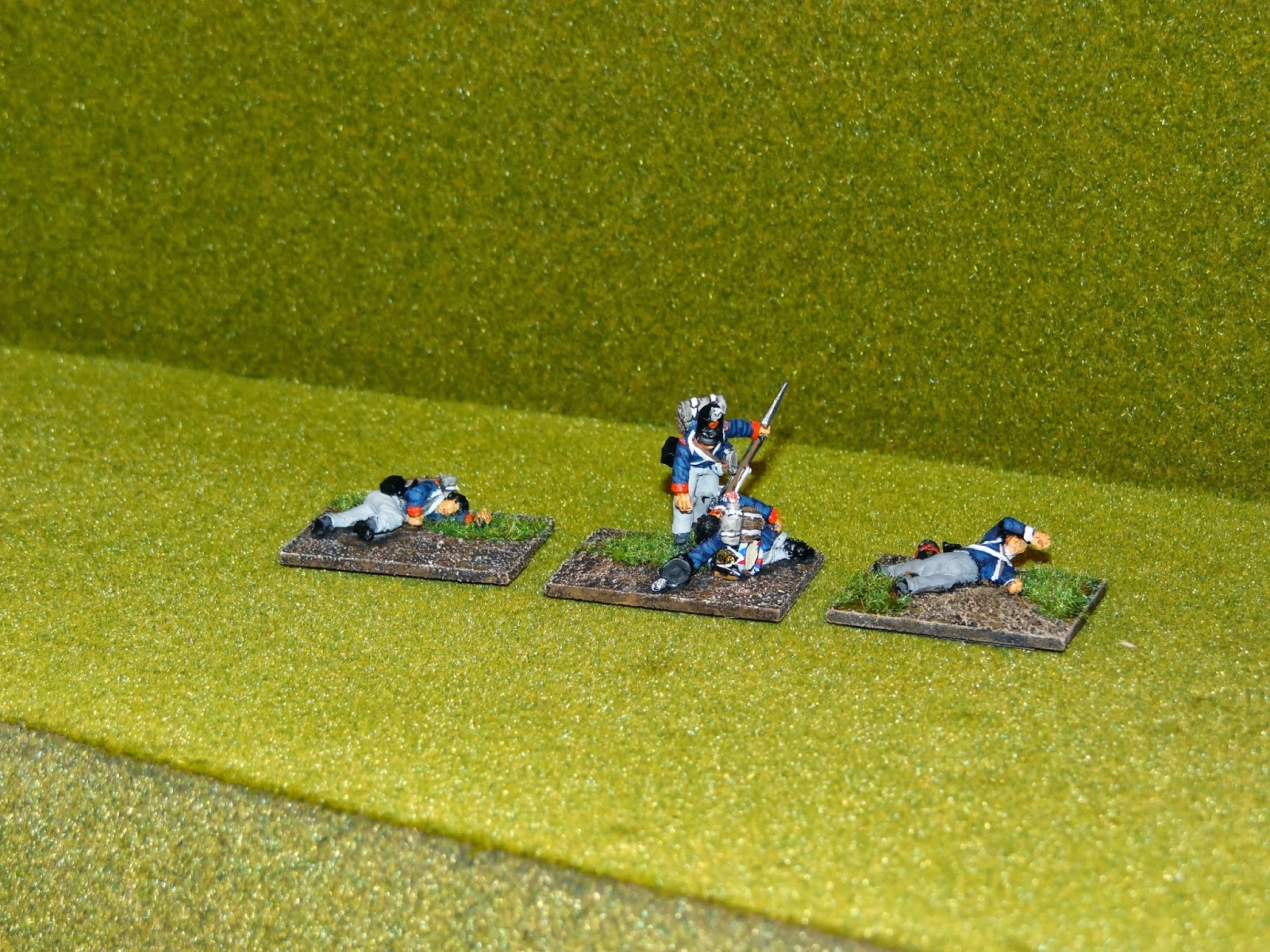 I now have enough painted miniatures to field the 1st brigade of the 2nd Dutch division as it looked at the start of Quatre-Bras. I only need to paint their commander, Van Bijlandt.
I then also need to paint the other brigade, to field the complete Division (another 174 miniatures), plus artillery. And then 2 cavalry regiments. I'm not there yet...
But here is how it looks now: 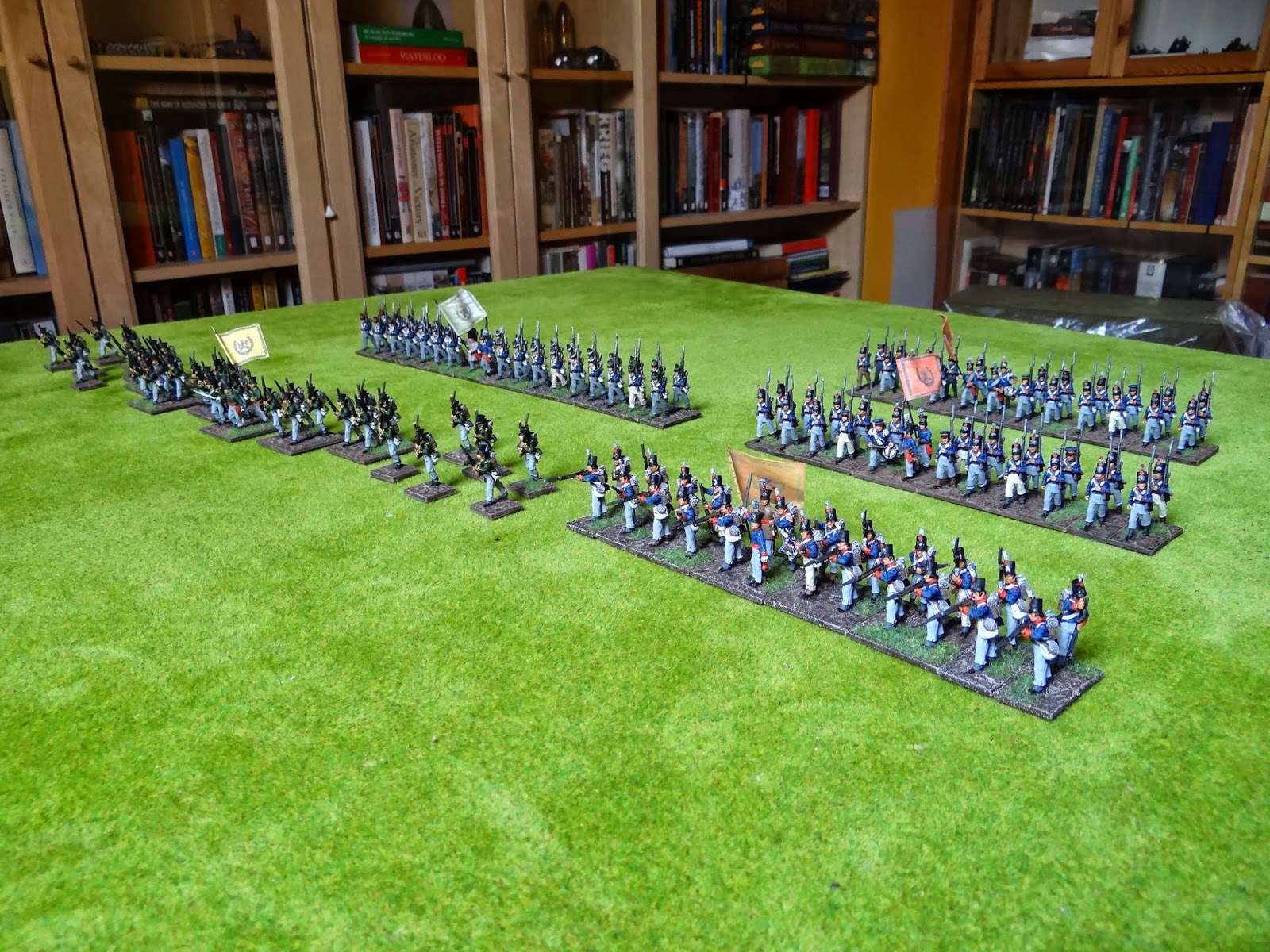 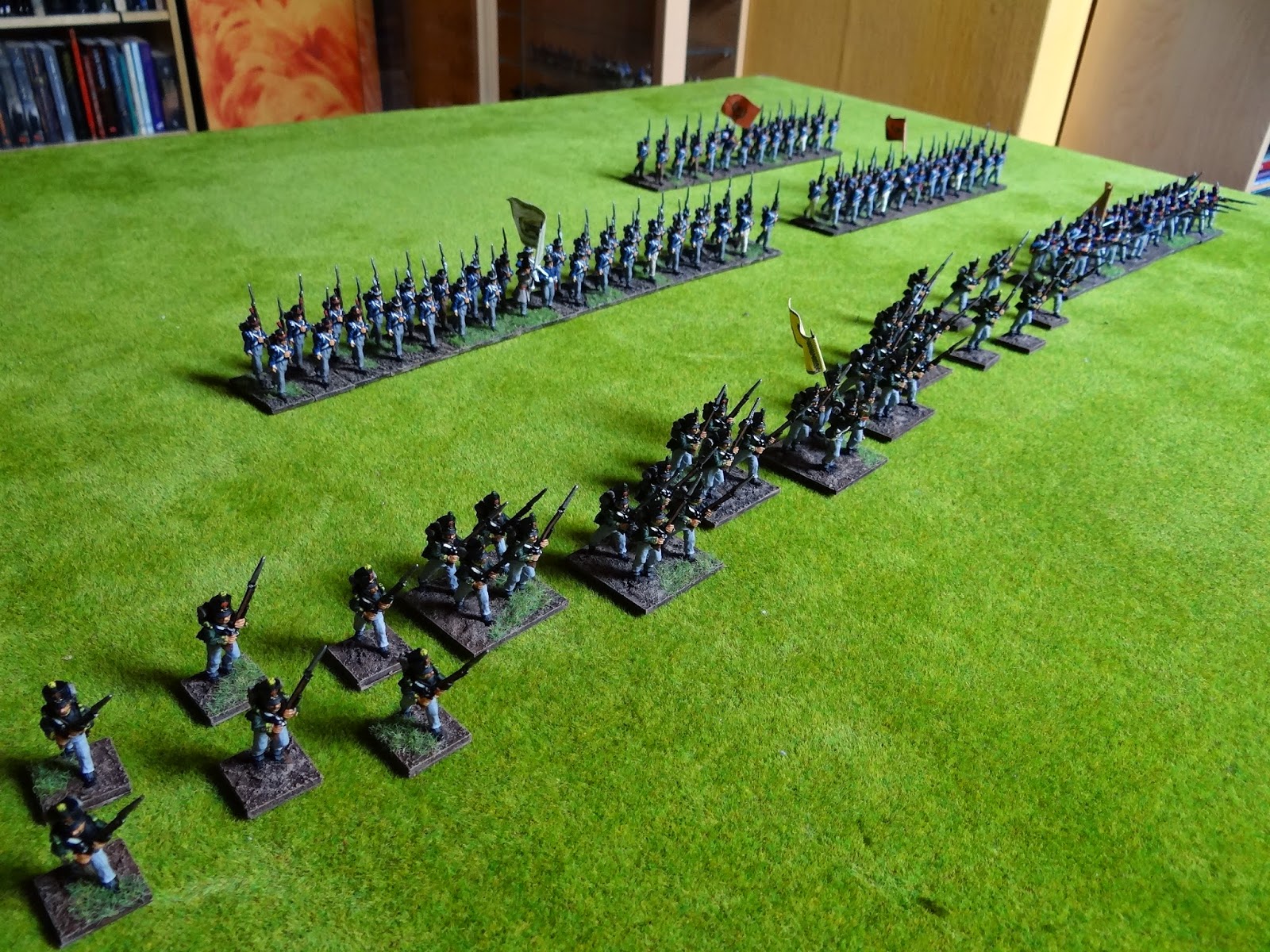 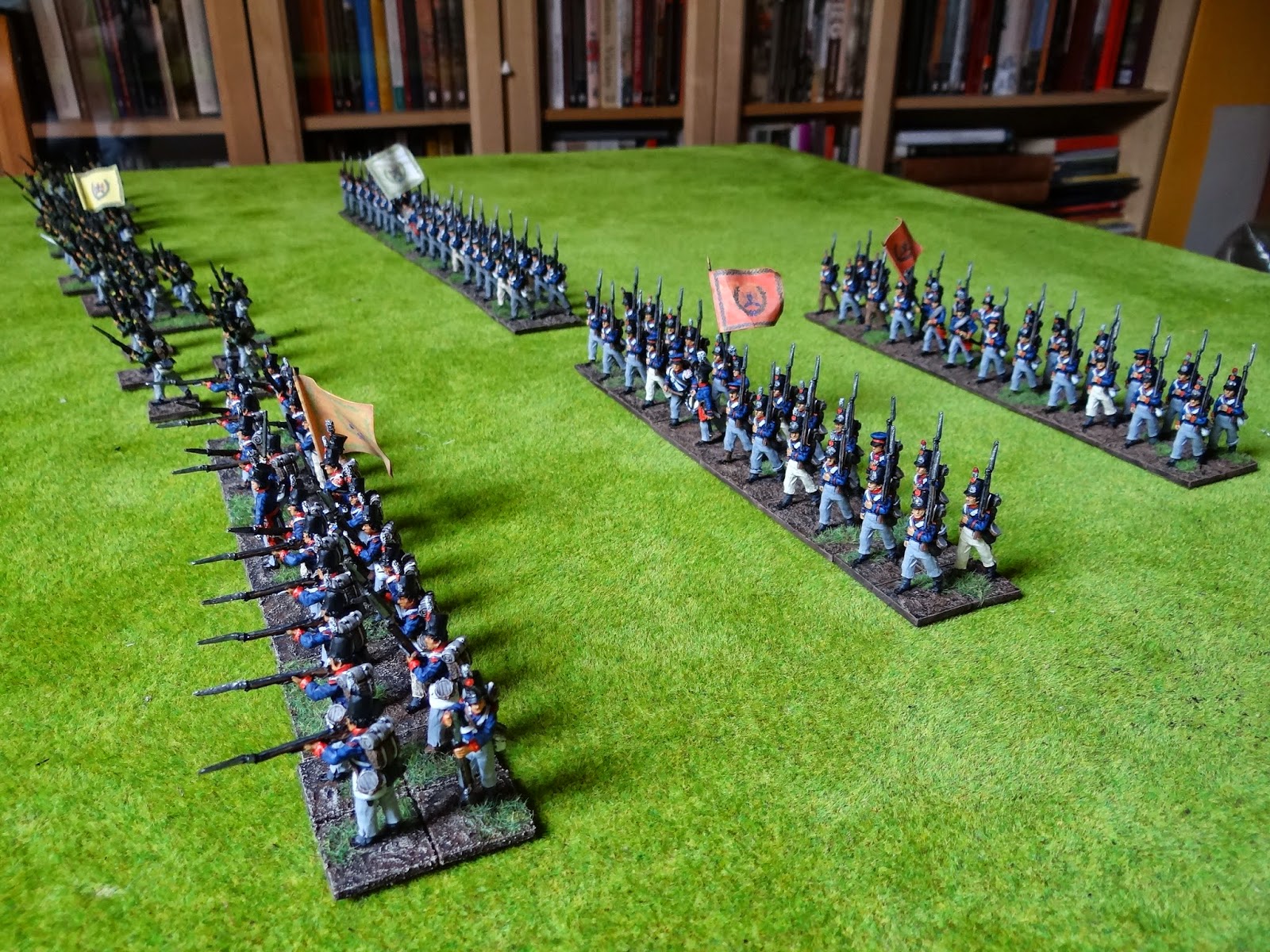 One thing that is already clear to me is that we will need a huge table to play a good sized battle.
I'm currently working on one of my other armies (next to reading Bigredbat's rules - will need testing soon).
Pictures when I'm ready!

As addendum, I would like to put a link here to a nice overview of Salute 2014, made by the  Wargames, Soldiers and Strategy people: https://www.youtube.com/watch?v=PE8kQ6AkPU4
Gepost door WimVdB op 14:14 2 opmerkingen:

Visiting a show in the UK.

So, Salute lies a week behind us.
I've visited the show this year with two of my wargaming friends, and belief we all had a great time. We went by train (TGV) on friday and had booked a hotel room only 500 m from Excell. We had to "travel light", because we had to take all our bagage with us all saturday long, and then go home that evening. We could use "luggage" from the well known Terry Pratchett books!
With all this in mind, I did not bring my camera with me. Pictures enough around the web for who wants to see them I guess. (Check for example www.theminiaturepage.com ).
So where did I spend all my cash? 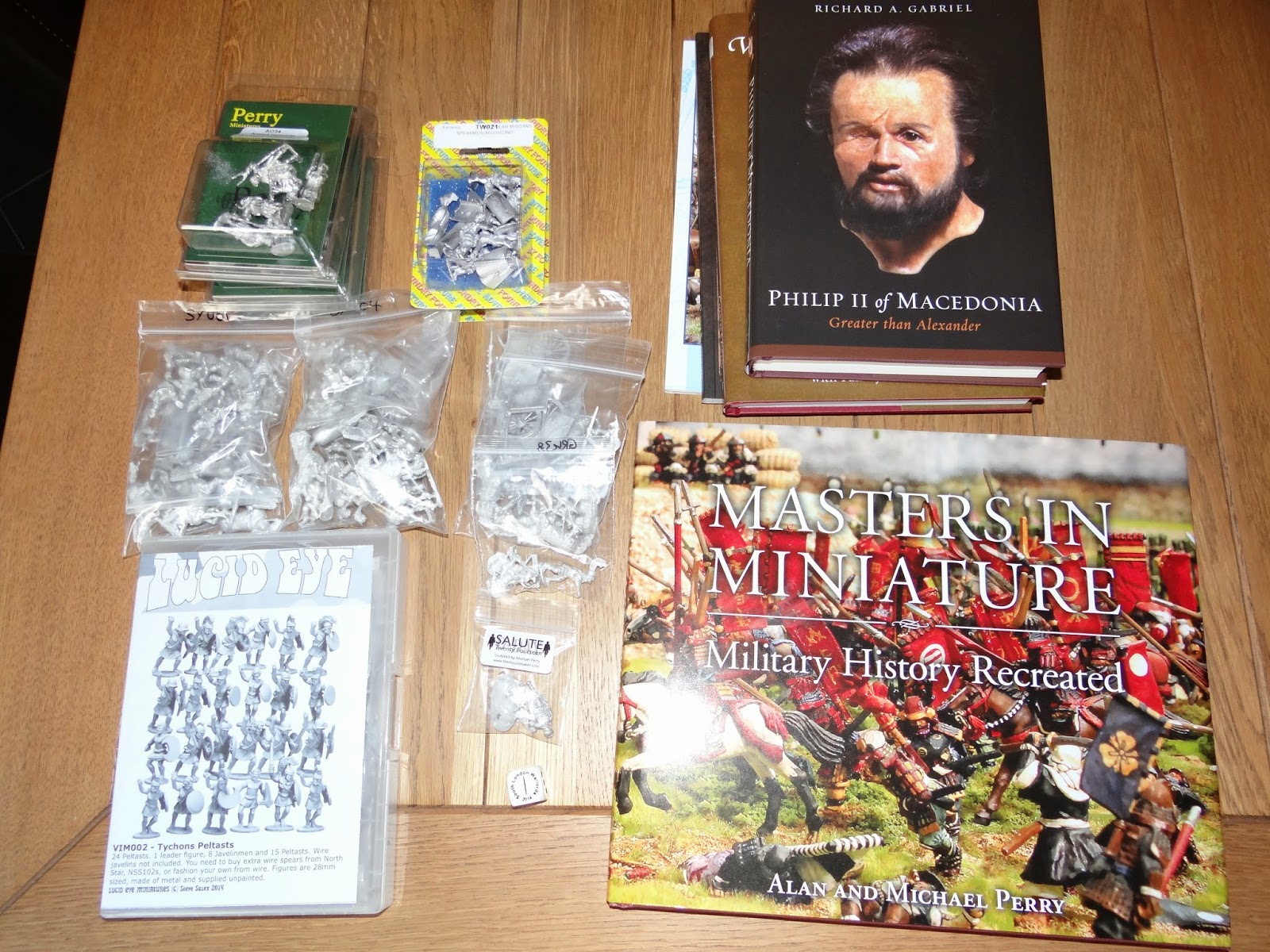 Here's a list:
I pict up my advance order from 1st Corps (two unit packs of Skythian cavalry and a some smaller bags).
Two blisters of Foundry Mins. (Impulse, was only £10.00 / blister)
Three blisters of Perry Mins (planned)
A box of Peltasts from the new Steve Saleh company (Lucid Eye). Steve is the guy who sculpted all the World of the Greeks miniatures for Foundry. Most of my Greeks are Foundry, so they will fit in perfectly. (impulse)
One book from the Wargaming in History series and The War Game by Charles Grant (Kent Trotman). The others I wanted were OOP. (Was also ordered in advance)
One Osprey book from the Myths and Legends series, Troy. (Impulse)
Two book at Casemate Publishing. I'm especialy looking forward to read the book on Philip of Macedon. (Impulse, 20% discount!)
And last but not least, Masters in Miniature. A really fantastic looking book on the miniatures of the Perry Brothers. My copy is signed by both Alan and Michael. (Planned)

I also viewed lots of demo and participation games, but time was too short to play a game. And after seeing the pictures from others, I still managed to NOT see everything there was to see.
I did missed Simon (Bigredbat) when I finaly got to the WSS demo table. The game looked good and they rules seemed to be simple enough to play a few game on the day. They were not Simon's rules though. I also wished I had spend some more time at the Society of Ancients participation game.
At the end of it, I think I will have to visit the show again next year.

There is some bad publicity for the show on the WWW, but if they (the moaners) can do better, go ahead! It is not an easy task to organise an event with a few thousand visitors and I don't know how many traders and clubs.
Many thanks to the South London Warlords, who organise the show now for many years.

Next update will be on painting. Yes, I have painted a few units already this year!
Gepost door WimVdB op 13:57 Geen opmerkingen:

Sorry, there is no excuse for not updating my blog earlier.
It's not that I've not done anything wargames- related, just, well maybe blog-tired. (did I just invent a new word???)

Anyway, here is a short report on what happened that friday evening, at the end of 2013. Or at least, what I remember of it...

Both armies started a bit cautious. the Greeks tried to get through the hills/mountains on their left with some skirmishers, where no formed units could pass. When the Macedonians tried to stop them with the Thracian peltasts, the Greeks charged them with their cavalry! 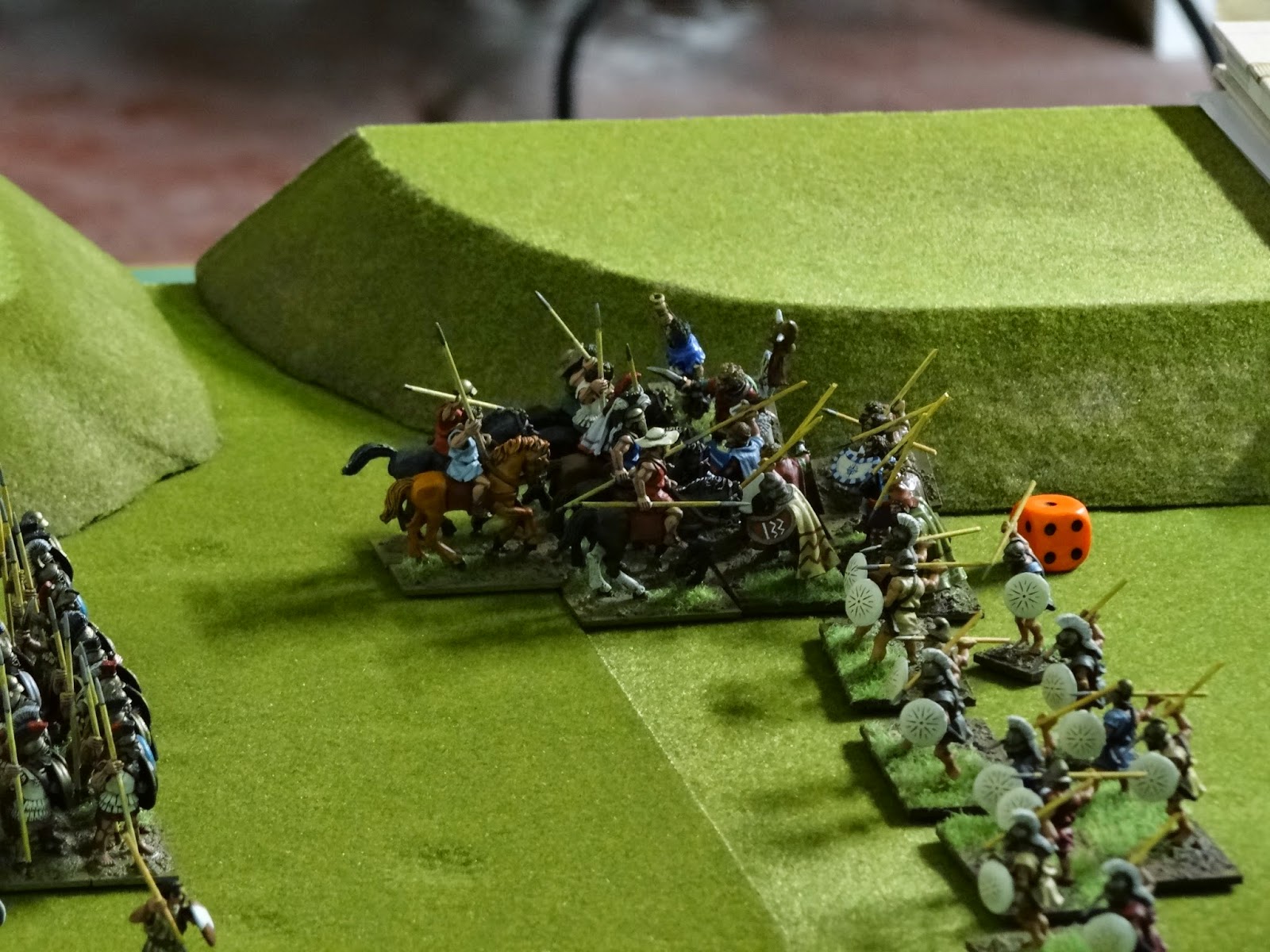 Bad luck for the Greeks, though. The dice were against them, and they only inflicted one casualty! The Thracians got better luck, and got the cavalry running away from them, killing several mounted Greeks.

In the mean time, skirmishers were exchanging missiles all over the table Not a lot of victims, but most skirmish units are very brittle, and don't need a lot of casualties to run strait of table. Not this time. 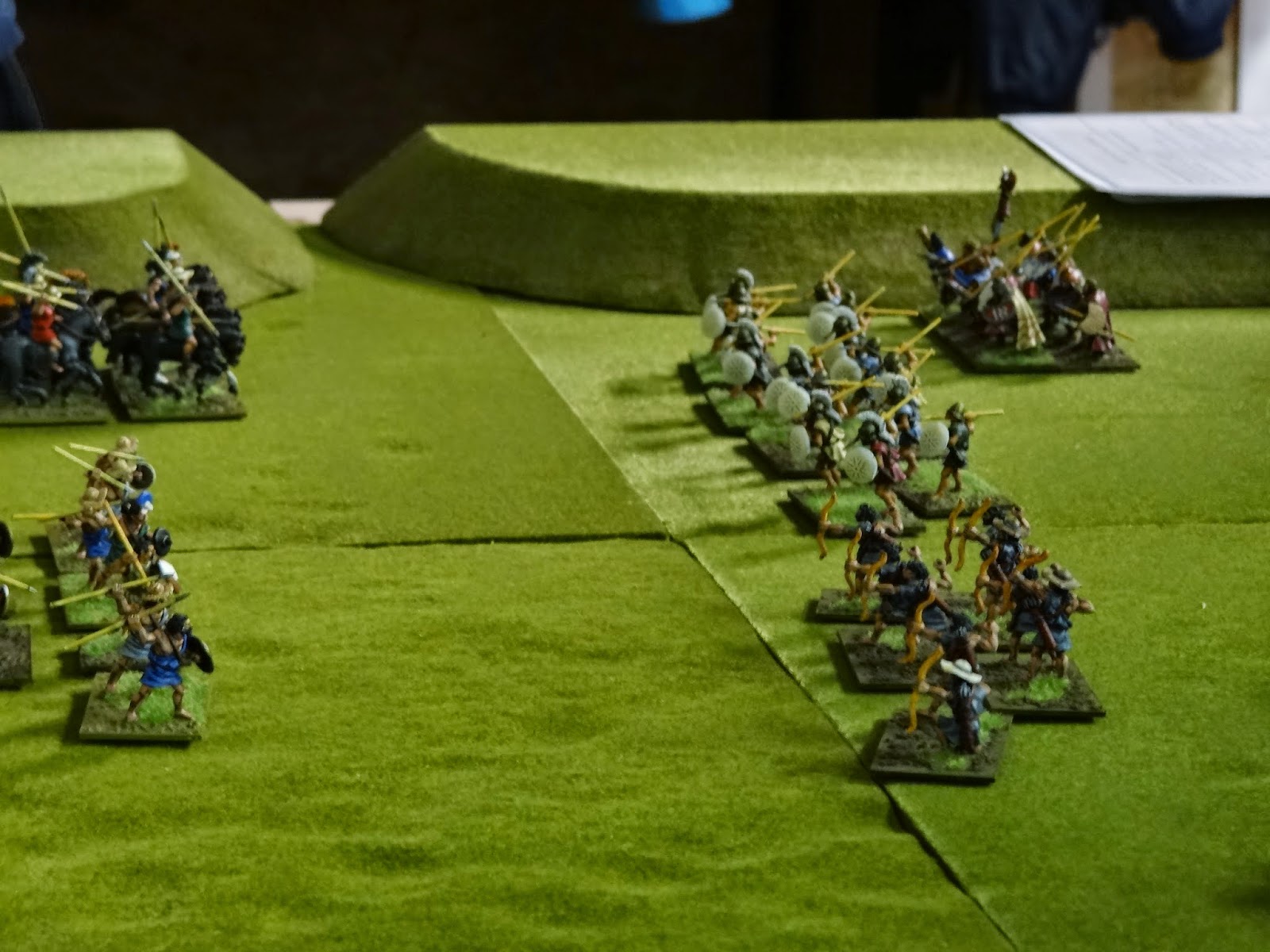 (This picture is actualy taken before the one above, hence the cavalry is yet to make contact)

it is now time for the Macedonians to advance . They try to attack on their left, Greeks right, where the heroic Theban Sacred Band is positioned. They don't wait for the Macedonians, and urge forward themselves, while the other Hoplites keep the line unbroken and also advance. 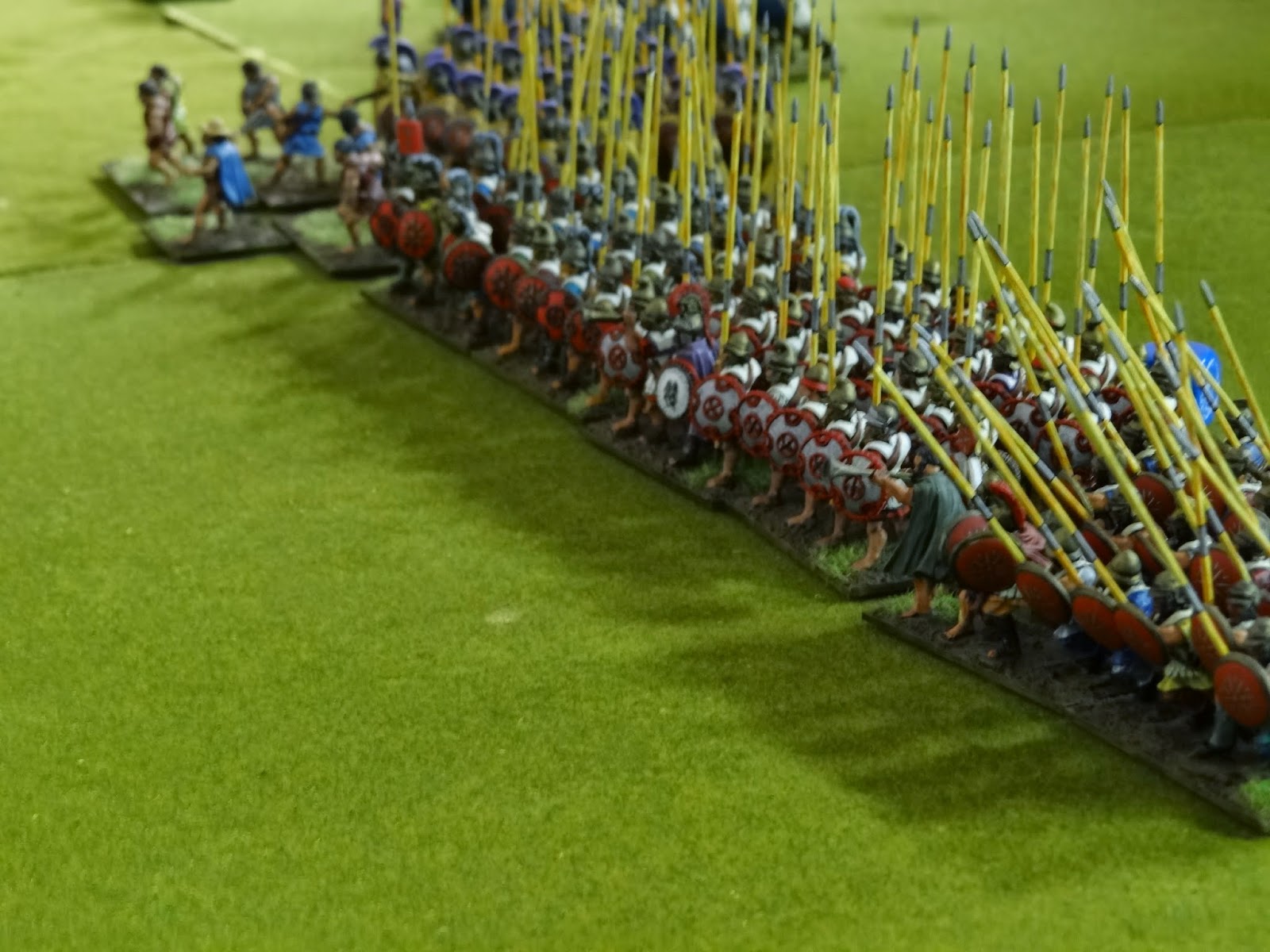 One of the Macedonians phalanx doesn't make the test after combat, and breaks!
Alas, no luck for the Greeks. In another combat, that same bound, the Greek generals gets killed, and the whole army must test. Most of the unit make the test, but in combat most of them have to test again, due to receiving more casualties then the Macedonians. In this second test many units take the battle for lost and start running away. With no general to boost moral, this is a disaster for the Greeks. The Macedonian Companions then surge forward, and, after only 5 turns battle is over. 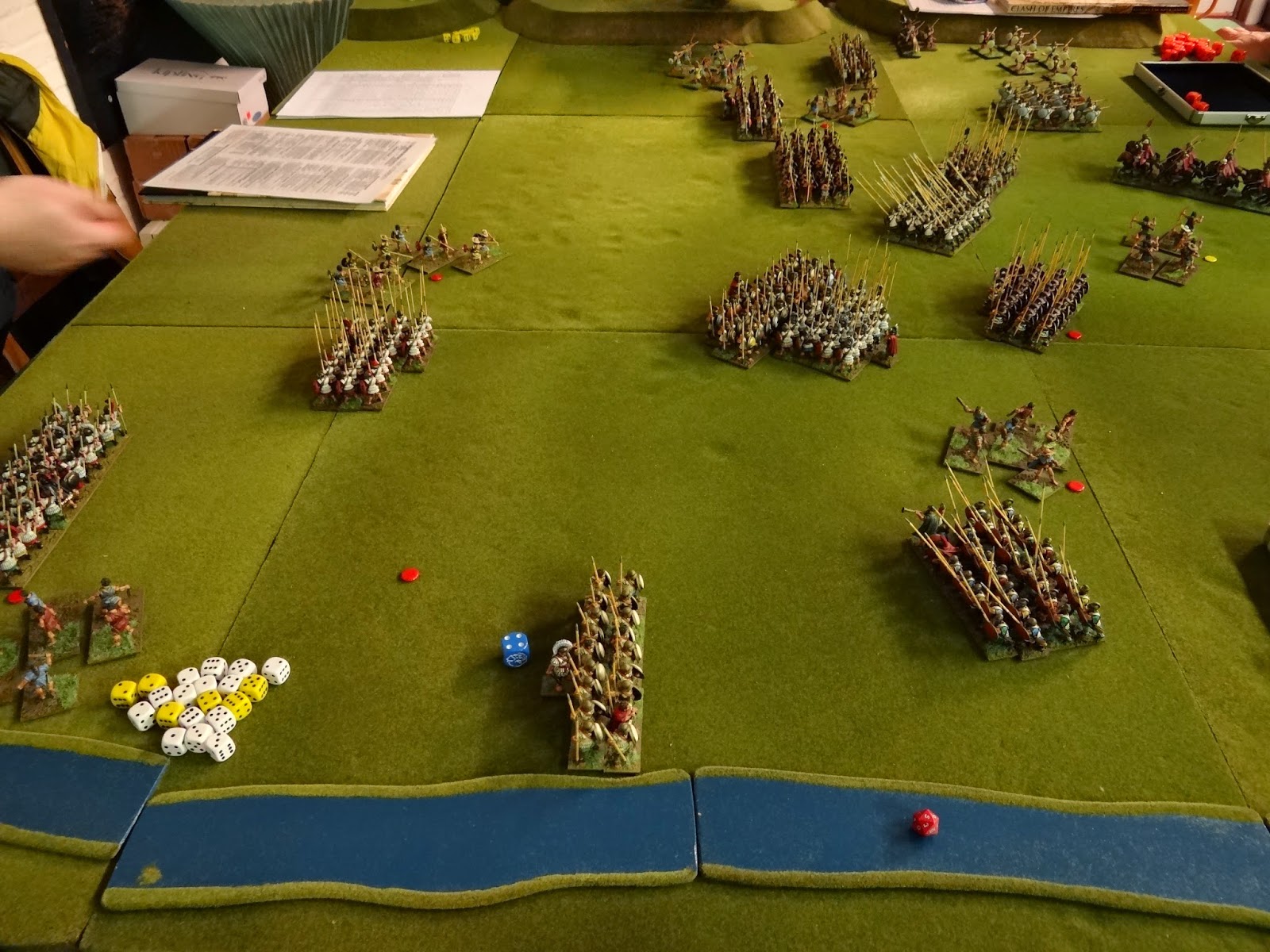 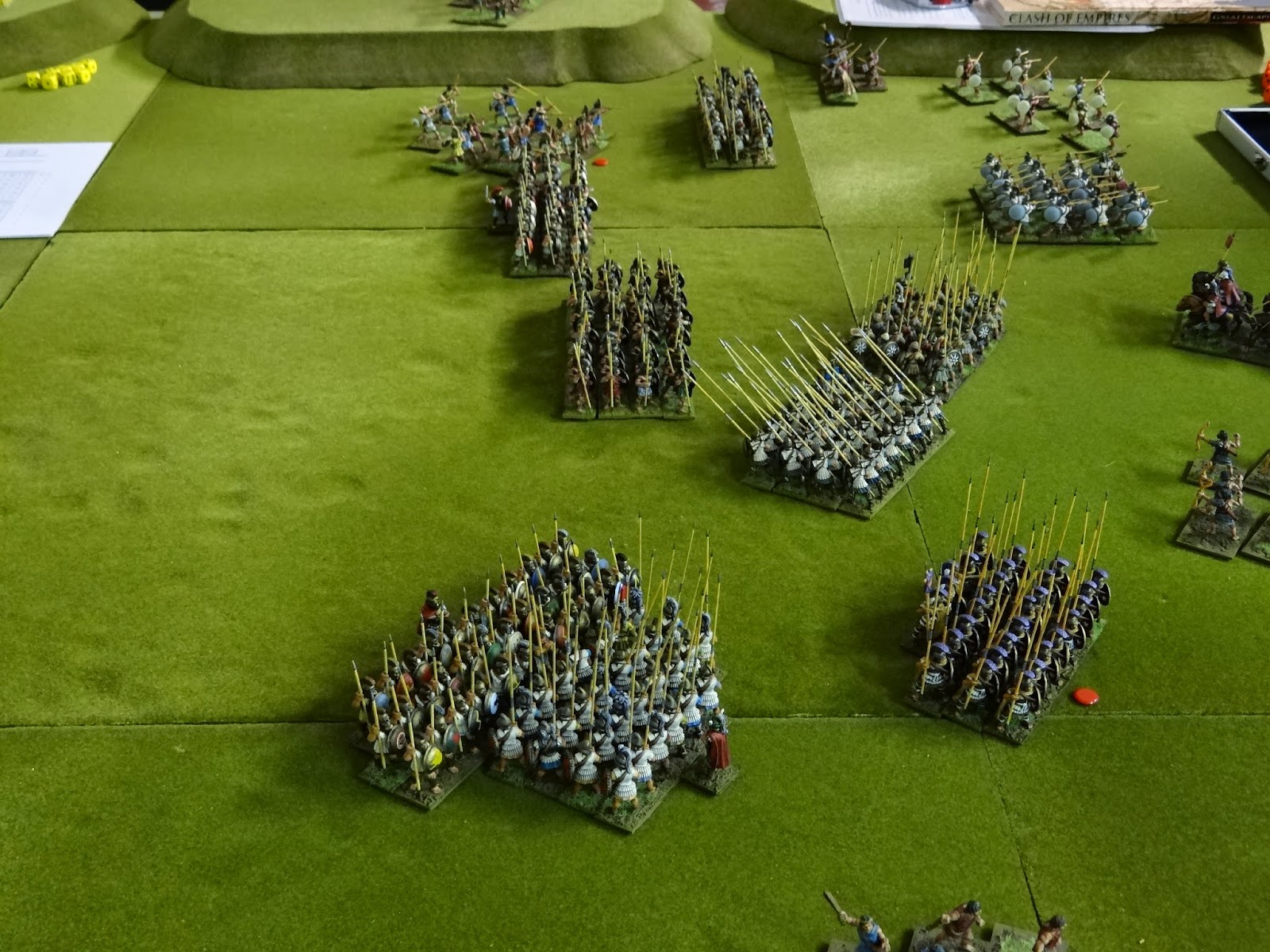 Many thanks to Peter and Johan - the Greek generals, and Chris and Bert the Macedonian generals. They all told me the battle was great fun to play.
As said before, we used Clash of Empires, and armies were around 4000 point a side, with +/- 700 miniatures on the table. Playing time was just over 3 hours.

Tomorrow I make a little trip, together with Peter and Johan to London. We booked a hotel there. The day after, it's Salute time!
For those who never heard of this (no, impossible!) that is the biggest one day wargames event in Europe.
I hope to meet some fellow-bloggers there. I will go search if I can find Simon (Bigredbat) who's figures will be used by the WSS team for their show game.

See you there!
Or not...
Gepost door WimVdB op 14:07 Geen opmerkingen: