My latest addition to my Successor troops is a unit of Thorakitai.This unit was painted a week or two ago, but I had yet to post them here.
For those not knowing what excactly thorakitai are, see wikipedia for a short explanation.
They are a slighty heavier troop type then Thureophoroi, but probably had the same role in armies of those days. While Thureophoroi were unarmoured, except for a shield, Thorakitai were wearing chainmail on top of the shield. 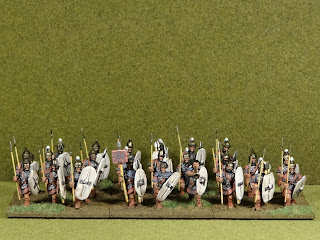 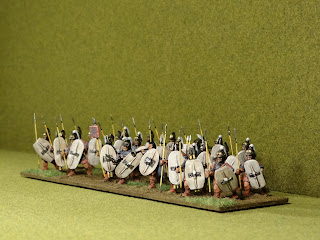 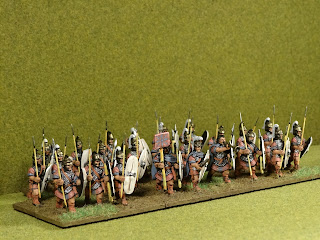 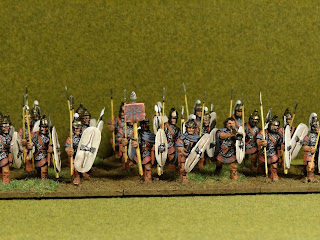 The models are made by 1st Corps, and look good once painted. I had some doubts about them before I started painting them, but hey, check the pictures above! And they are not expensive at all for metal 28mm figures, at £21.60 for 24 figures. (see here).
I have more 1st Corps figures in the Lead Mountain, but I think for the time being, I'll work a bit on my other projects now. I know, I have way too many interests...

My (first?) Dragon Rampant band is nearly finished also now. I hope to put pictures here before the end of the month. I you don't know what Dragon Rampant is, see Dan Mersey's blog, who is the author of the rules and its medieval historical precursor Lion Rampant. There are more variants in the pipeline also.
Gepost door WimVdB op 12:45 11 opmerkingen: